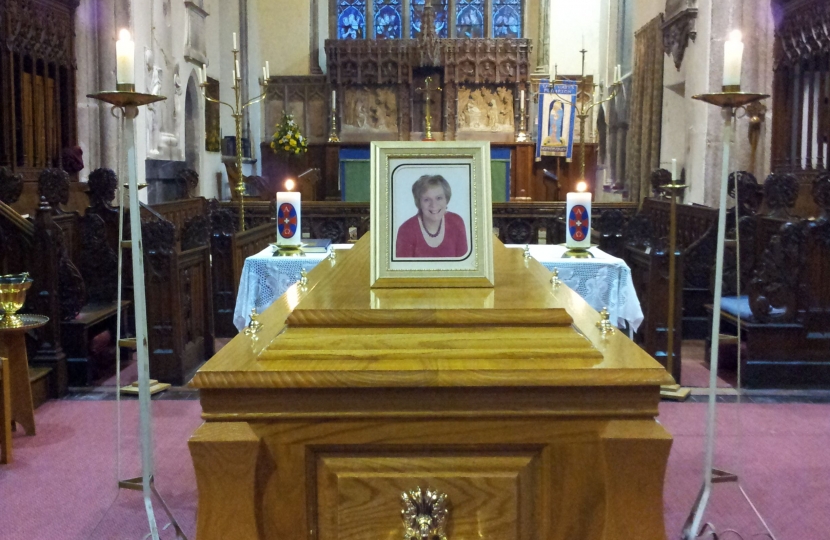 On Wednesday 12th February 2014 the Funeral took place of Kevin's Mother, Mrs Linda Joyce Foster, here he copies the Tribute Speech he gave for those who could not attend:

Mum was born in Devonport on 10th September 1954 to her Parents Cyril and Rita Griffin.

Most of you will know her as “Lin” Foster, but to her family she was always Linda. I remember as a child being shown “Harry” her teddy bear, well-worn with love. Harry had been her Brother’s, until John toddled towards her cot one day, dropped him in and said “He’s Linda’s now”. That sign of Brotherly love was with her throughout her life and is now in the place they would both want him to be, beside her side as she sleeps.

Growing up in Ham, Mum went to the local Primary School, where she had some not very fond memories of swimming in a cold outdoor pool, then onto Plymouth Public her Secondary School, the building of which still stands to this day. Mum made friends easily and kept in touch with her best friend at school for the rest of her life.

Mum trained as a Dental Nurse and was working for a practice in North Hill when she fell pregnant with me. Going to the Dentist never held any fear for me as a child as it was usually linked to going up to Murray’s lab on the top floor which had lots of interesting things to look at, mostly dentures under construction, and things to talk about.

Mum believed in not just hoping for her Son to have a good education, but helping make it happen. This drew her into helping at both of my schools, with stints as Chairman of the PTA at both Glen Park Primary and Hele’s School. For hundreds of other children she will always be the “Mrs Foster” at Glen Park who helped them learn to read or write.

There are many things I could say about how Mum supported me over the years. From the walks down the Ridgeway as a toddler, teaching me to read with my first pop up books, the encouragement when things seemed difficult during school years, her always being at the end of the phone during my time at University or the way she was always keen to come along to support the events I did in my political life.

I knew she took great pride in my achievements and I regularly collected my press cuttings for her scrap book. Those from Coventry will instantly realise that she regularly had to buy another one as I soon filled them up. I can still recall the pride in her voice when I was first elected as a Councillor, the delight when I got onto the parliamentary candidates list and the strong encouragement to go that extra bit more to get selected for the constituency of Torbay. An area she had many happy memories of from family holidays and trips, with a photo of her looking very happy with a big stick of candy floss on Paignton Beach being a favourite image.

In the last month of her life she talked about her excitement at being invited to a Garden Party at Buckingham Palace in July 2007. It was my turn for two tickets and for anyone who knew my Mum’s love of tea, there was only one person to come with me for a cup at the Palace. I knew she enjoyed it, but it was only a few weeks back when it became clear just how much it had meant to her when she asked that her final outfit would be the one worn that day.

The key thing I remember is that she always encouraged me to do my best. Things would not always go well and circumstances may prevent something happening, but if you did your best you should have no regrets as something else will soon come along.

Mum was like that with all who knew her and experienced the warm love and friendship she offered. Never letting anyone think she should be pitied for the illness she had in recent years. Mum was determined to carry on and the last three years have been a special time with so much done together with Dad & I, but also her close friends.

Even as the end approached Mum was still keen that we knew what the things we had shared meant to her, and during her final days spoke not about a fear of death, but a disappointment that we could not share some of the things that are yet to come.  However, as she said “she will be there in the shadows”.

At the Hospice Mum’s spirit shone out and one moment summed her up perfectly. She had been indoors for weeks and wanted to go out. When offered a trip to the Café we were told “No. Out, Out.”. Her bed was wheeled out into the garden and as it was she smiled.

As it was cold we put our coats over the bed, but after a couple of minutes a drizzle started. Mum looked crestfallen. All that effort for nothing. Then the clouds parted and the sun shone, prompting a run to my car for the sunglasses. So there was Mum wearing Dad’s hat, mu sunglasses and a big smile. Then as the four of us looked upwards a voice said loudly: “God is looking at us”.

On the last two nights of her life I slept in the Chair next to her bed. Keeping her company in the way she had done for me so many times when ill health or worries struck. Before settling to sleep I said good night and wondered if she had heard. Then just as I was about to drop off I heard clearly “Night, Kev”, the last words my Mum would say.

If you would like to make a donation to St Luke's Hospice in her memory you can do so by visiting wcpltd.com & selecting Plympton.

If you would like to make a donation to St Luke's Hospice in her memory you can do so by visiting wcpltd.com & selecting Plympton.