Kev's Column: On Your Bike At Clennon Valley? 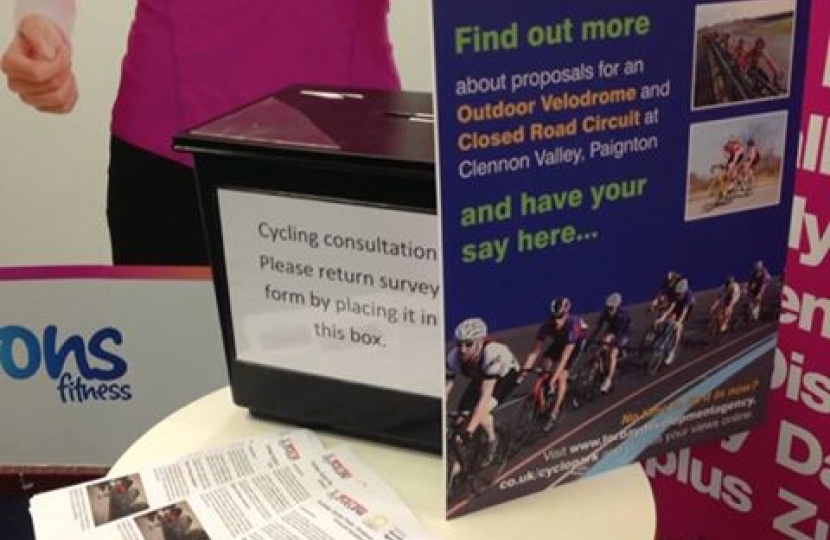 On Your Bike At Clennon Valley?

Every week Kevin publishes online his thoughts on the news in his very own Kev’s Column. This week he takes a look at the issue of the proposed Velodrome at Clennon Valley:

The project to build an Outdoor Velodrome has been hailed as an opportunity to bring an exciting new offer to the bay and help build a real Olympic Legacy.

This week I attended the packed public meeting held in the neighbouring Torbay Leisure Centre where the concerns of local residents living nearby took centre stage. During the meeting a range of issues were raised by residents, who to be fair for the most part appeared supportive of the overall idea but looked to raise queries about particular aspects of the plan in relation to how it would impact on them. The parking problems in nearby roads were highlighted, as were concerns about the visual impact of the development.

Some interesting suggestions were made as to how to tackle them. One I particularly liked was from Cllr Jane Barnby who suggested green coloured tarmac be used to reduce the visual impact of the road circuit. It may sound strange but coloured tarmac is fairly common and would be a pleasant contrast to the field of black that is the car park next to the Leisure Centre. There was also a pledge to hold a further meeting in four weeks time to address the concerns around parking after a vote on doing so was called by Cllr Alan Tyerman.

The Velodrome Project is a significant undertaking and its scale should not be underestimated. The proposal features a 250 metre open air cycle track banked at either end, with a closed road circuit around it that will be 6 metres wide and at least 1.25km long. At the meeting local Cllr Alan Tyerman estimated that this was equivalent to 2 and half football pitches worth of tarmac being laid.

The finance to build it is a mixture of an £800,000 grant from British Cycling and match funding from Torbay Council which was approved by a vote of Councillors in May. It is only right to say that this scheme was backed not only by the controlling Conservative Group, but by Independent, Liberal Democrat and Labour Councillors in a welcome sign of political unity. The facility will not be free to use as the business plan for its operation means that a charge must be made to cover its running costs.

Some in the bay have questioned whether the business plan stacks up and if this facility could become a white elephant. Yet is this really an opportunity we could ignore? Would after British cycling success in Rio 2016 bay residents feel good if such investment had been sent elsewhere? The council should not write a blank cheque from the taxpayer, but if we turned this down it would give the impression that in the bay we knew the cost of everything, but the value of nothing.

From my perspective this is a once in a generation chance to create a facility in the bay that both gives local cyclists a facility to train for the Olympic disciplines, whilst at the same time attracting regular visitors who will no longer need to travel to Bournemouth or Bristol to use such a facility. The Velodrome costs are not insignificant, but comparing them to the potential costs of replacing the neighbouring Torbay Leisure Centre does give a sense of perspective.

In the consultation it is important the Council responds to the concerns raised and looks to create a facility that is not just for those looking to train for competitive sport, but where local families are welcome too. Yet in dealing with the concerns about parking or ticket sales that were raised we must not lose sight of the ambition to have a regional facility here in the bay that could one day produce an Olympian.

The costs are clear, but for me so is the value.

If you have not yet had your say on the proposals you can do so by following this link to the Council’s website:

"Would, after British cycling success in Rio 2016, bay residents feel good if such investment had been sent elsewhere? The council should not write a blank cheque from the taxpayer, but if we turned this down it would give the impression that in the bay we knew the cost of everything, but the value of nothing."