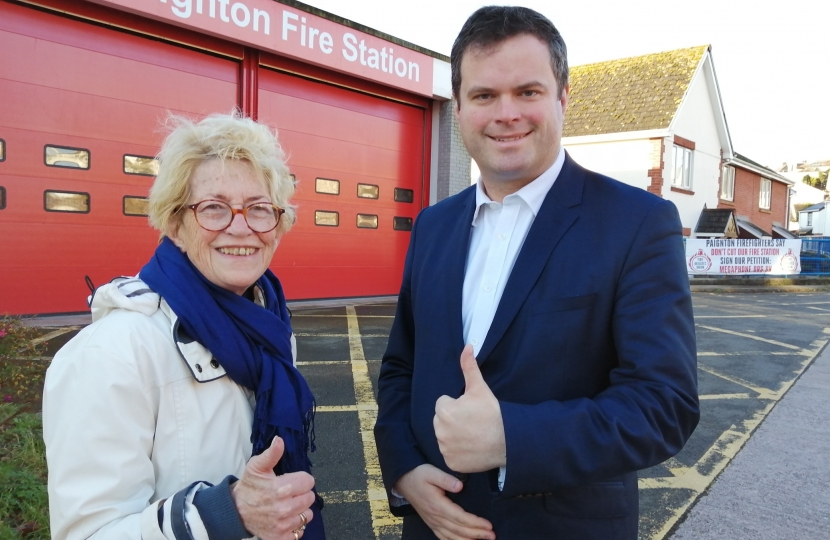 Every fortnight Kevin writes a "Kev's Column" for the Herald Express and you can read the latest edition (Published on Wednesday 8th January 2020) below:

There was welcome news for our bay when Devon & Somerset Fire Service announced they were not pushing ahead with plans to scrap overnight whole-time fire cover at Paignton Fire Station.

When the proposal was first announced I joined thousands of residents, the community partnership and local Councillors in getting behind the campaign run by local firefighters and the Fire Brigades Union opposing it. It would have left only one whole-time fire crew on duty in our bay overnight.

I am pleased they have been listened to, although disappointed the responses were not enough for the service to recommend keeping the third engine, operated by retained firefighters, at Torquay Fire Station.

There is a lot of talk about what increased investment in the North of England may mean for the South.

After many years of under investment it is welcome some deprived northern communities can look forward to more fairly competing with London for funding. Yet it is worth looking at the details of how some policies described as focussed on northern towns actually turned out.

The “Towns Fund” is designed to invest Government money into areas or towns which had been hit by economic changes over the last 40 years. Commentators constantly said this would be targeted at northern towns, yet Torquay is in line for a Town Deal worth up to £25m from it.

The same goes for the Future High Streets Fund which some speculated would only focus on northern towns. Paignton could get up to £15m from it. Cornwall also did well from this fund.

Where this effect comes from is whilst we may be in the south geographically and closer to London physically, our statistical neighbours are many of the northern towns, especially coastal ones like Grimsby and Blackpool. This gives us the opportunity to securing our share of funding for areas which felt left behind over recent decades and have seen changes to their economy.

It is not about North v South, rather ensuring investment is better distributed across our nation.

Devon, Dorset, Somerset and Cornwall have a strong voice with so many members of the Government representing seats here, hence the progress we are now seeing on the A303 and the Dawlish Coastal Railway. Yet to take advantage of this it is vital our region works together on agreeing and championing our priorities.

I have backed calls for us to look at forming the type of combined body other regions have used to help drive forward key transport & major economic development schemes, although based on the four counties current councils working together rather than electing a Mayor to run a new one.

I described this as a "Peninsula Powerhouse", let’s hope 2020 sees it come about.

"after many years of under investment it is welcome some deprived northern communities can look forward to more fairly competing with London for funding. Yet it is worth looking at the details of how some policies described as focussed on northern towns actually turned out."