Delegation from the UK Commonwealth Parliamentary Association to the Parliament of New Zealand. 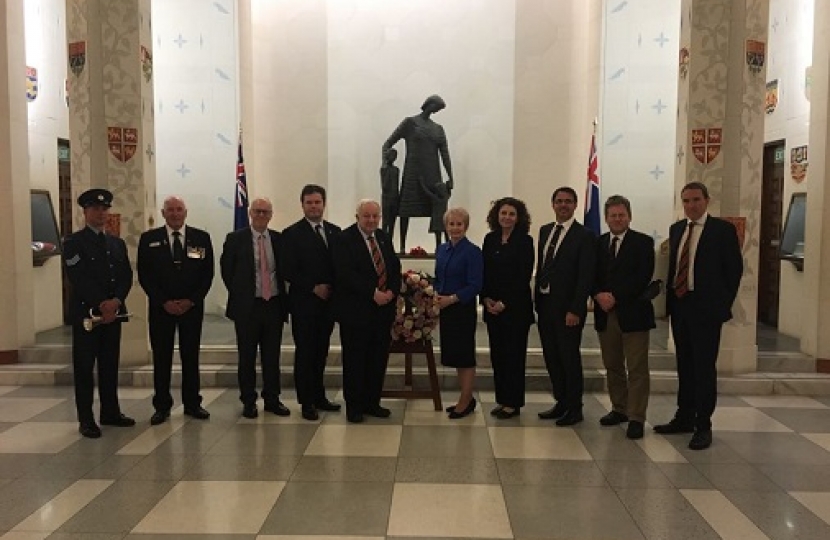 This week (9th - 13th April) has been a very different one from normal for me as I have been taking part in a delegation from the UK Commonwealth Parliamentary Association to the Parliament of New Zealand. I was asked to take part based on my previous service on the Public Accounts Committee and my current role in the Cabinet Office.

Whilst the main purpose of such visits is learning from the practices of other parliaments, the UK leaving the European Union has raided the prospect of a very different trading relationship between our two nations. This prospect has influenced a range of the meetings organised for the delegation and seen us prioritise meetings with those New Zealand MPs who could be voting on a Free Trade agreement with the UK.

Monday saw a day in Auckland, New Zealand's main business centre, focused on meetings centred on trade and expanding business links. This included meeting the New Zealand\Britain Business Association and KEA, an organisation which connects New Zealand's ex-patriots across the globe, then a brief discussion with the administrator for Pitcairn Island about the unique challenges faced by the most isolated part of British Territory. This was followed by an evening flight to Wellington, New Zealand's capital.

Tuesday morning started with a 07:30am meeting at the British High Commissioner's Residence in Wellington for a briefing on the political situation in New Zealand, plus the progress of Free Trade Talks. This was followed by meetings with the Ministry of Foreign Affairs and Trade, The Speaker of the New Zealand Parliament and the Deputy Prime Minister. During all these meetings the prospect of a trade deal was discussed, along with the issues presented by both Chinese and Russian activity in the Pacific Region.

Tuesday also saw a reminder of just how close our nations have been over the years, as I got the chance to visit Pukeahu National War Memorial Park. This park commemorates those who have died in the service of their country, including 30,000 who lost their lives in the two World Wars. It is poignant to read stories of those who left their home to travel over 11,000 miles to fight alongside us when Britain faced its darkest hours. We took part in an act of remembrance and laid a wreath on behalf of the UK Parliament (As pictured above).

Wednesday was focused on meetings with the Select Committees of the New Zealand Parliament which have a different role to their UK counterparts. These Committees not only scrutinise government departments, but also consider legislation. I also meet with the Commonwealth Youth of New Zealand, a group looking to get the next generation involved in the Commonwealth of Nations we are both part of.

Thursday saw timely discussions with the Parliament's Committee on Foreign Affairs, Defence and Trade. The situation in Syria was unsurprisingly a main item for discussion, with views on the committee there being very reminiscent of the type of the discussion at Westminster. This was followed by the start of a two day seminar between the UK Commonwealth Parliamentary Association and Pacific Island Parliaments focused on sharing good practice.

Today (13th April)  I visited the constituency office of a local MP to find out about their work. They are based in a shopping centre and discussing with them the range of issues they see in their surgery sounded very familiar to what residents raise during my surgeries. The main difference being most queries were face to face or by phone, rather than e-mail.

The overall impression from my visit is a welcome sense of New Zealand's business community and politicians being very keen to work with the UK post Brexit. Post Brexit Britain needs to look at markets in the Asia\Pacific Region for trade and growth. Helpfully New Zealand already has a range of trade agreements in place with the growing economies there, ones which the UK could look to replicate and take part in.

Ultimately in agreeing to do any visit like this I consider what the benefit for our bay will be from it. Securing new Free Trade Deals for our nation are vital post Brexit and New Zealand is a place Torbay companies can do business. Growing digital connections mean the physical distance is also less of an issue, as partly evidenced by this update. The Trans Pacific Partnership, which allows free trade between several countries in the region, was also highlighted as something the UK's involvement would be welcomed in by many Kiwi politicians.

Finally we could well see more tourists from the region head to our bay as travel gets easier due to more direct flights from the region. The reason? When describing where I represented to those I met I mentioned (jokingly) I was the MP for Basil Fawlty. It was remarkable to see just how many across the Pacific and New Zealand have watched our most infamous hotelier at work!!!!