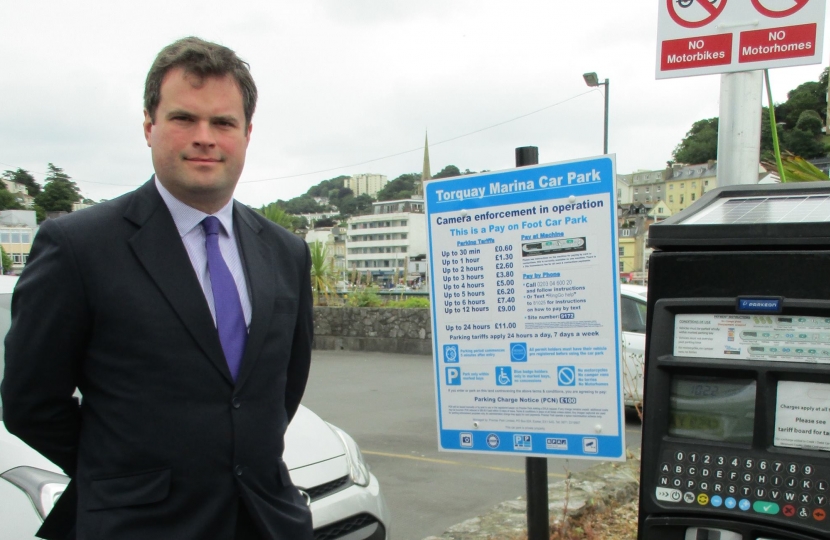 Since July 2016, Conservative Candidate Kevin Foster has been conducting a local survey into unfair private car parking charges in Torbay. The majority of the complaints from drivers have come from parking issues at Crossways and the Marina Car Park, and have been for what only can be described as very trivial ‘offences’ including pressing one incorrect button when inputting a number registration. In addition to his more general survey, Kevin has received over 50 specific complaints about individual cases of unfair treatment, some of which were from tourists visiting the Bay from other parts of the UK.

Many of the driver’s complaints about the unfair and harsh penalties focus on a common issue – private car park equipment that does not function properly, and as a result generates a hefty penalty charge. We are talking about number plate recognition cameras which don’t recognise number plates, and ticket machines which don’t allow you to properly input your car registration number. It is unacceptable and beyond coincidence that so many of the complaints focus on these same issues.

Kevin Foster feels that this issue has gone on for long enough. The private car park companies are fully aware of the problem, but are too slow to respond or to waive blatantly unfair penalty charges. This in turn is causing unnecessary stress and cost for often blameless motorists and visitors in Torbay. In addition to seeking another urgent meeting with these private car parking companies, Kevin hopes to stage a debate on this matter in the near future in the House of Commons. He has received widespread cross Party support in his application for a debate, the presentation for which he will be making in the House on Tuesday 7 March. It is clear from the responses and the level of interest in this matter than unfair private car parking charges is an issue that now needs tackling, if necessary, by legislation.

Since first being elected in May 2015, Kevin has received constant feedback from residents regarding unfair penalty charge notices being levied by local independent car parks.

Today, Kevin is taking a stand against the unfair and often intimidating way these companies operate.

It is clear that this is not just an issue that affects Torbay, but one that affects people across the United Kingdom. Kevin is looking to start a collective campaign involving Torbay residents that have been affected by independent car parking charges from both PPS (Premier Parking Solutions) and Premier Park Ltd.

Kevin has already surveyed the people of Torbay and will be using the feedback provided to apply for a debate in the House of Commons. The application had the support of MPs across the House, and we will keep you updated as to its progress.

In the meantime, if you have been affected by these unfair charges, we would highly recommend visiting the page run by Martin Lewis (the Money Saving Expert) at http://www.moneysavingexpert.com/reclaim/private-parking-tickets , which sets out your rights, the actions you can and cannot take, as well as more unusual methods of appealing against a charge, such as contacting the owner of the car park.

Whilst Kevin has written to both PPS and Premier Park on a number of occasions, as they are private firms he often receives the same response that residents receive. Hence, whilst Kevin cannot persuade the companies to change their view on the fees, he can attempt to bring the Government's attention to the issue.