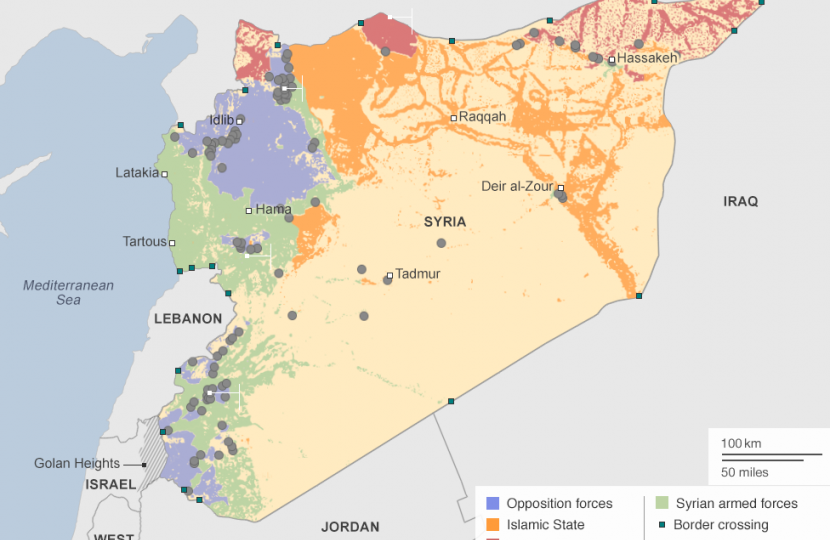 The Civil War has been a disaster for the Syrian people involving large scale loss of life and destruction, with war crimes having been committed on a vast scale. Ending this conflict and restoring stability is key to ending their suffering, plus removing a breeding ground for those who want to do us harm.

The Prime Minister gave a statement to the House of Commons on Thursday 26th November setting out his proposed strategy and response to the questions raised by the Foreign Affairs Select Committee. You can read it by following this link:

The motion that will be debated by the House of Commons today can be found by following this link:

It is worth noting that the Shadow Foreign Secretary Hilary Benn and the Liberal Democrat Leader Tim Farron have already indicated their support for this motion, in addition to the Government.

Whilst the UK has not been involved in the wider coalition taking military action in Syria so far, it is right that we consider what diplomatic and military support we should give in future to remove the death cult that is DAESH (Who are neither true to Islam or a recognised state) and end the Syrian Civil War. The recent terror attacks in Paris and In Tunisia earlier this year, along with the threat of attacks across Europe, including in the UK, shows the reality of the danger we face that is being incubated in the areas controlled by DAESH. One that we cannot just ignore, hoping it will go away.

The recent Security Council vote was a positive sign of a more united international front emerging in terms of resolving the conflict in Syria. Over the last four years a mix of conflicting alliances and threats of vetoes from Russia, has made getting concrete diplomatic progress very difficult. Securing agreement on a future government of Syria that can restore stability, whilst ensuring basic rights of those who opposed it are protected, is vital and I welcome the progress being made by the Vienna process involving a range of nations, including the UK.

Yet whatever diplomatic agreement is reached on Syria’s future it will need to be backed up with military assistance to defeat DAESH who have no interest in reaching a peace deal that does not support their own agenda. This is one thing all parties to the current talks agree upon.

DAESH are not looking for power in one country or area, but to spread an extreme ideology of hatred across a wide swathe of the globe, in a similar vein to the Nazi and Fascist regimes of the 1930’s who attempted to do the same. Their methods of terror in the areas they control, including slavery and genocide, are depressingly similar to what many parts of occupied Europe faced in the 1940’s.

In Iraq, where the UK has been involved in military action over the last year our objectives are clear:

1. Prevent the Kurdish Autonomous Region from being overrun and support the Peshmerga Forces fighting DAESH on the ground.

2. Support the Iraqi Government in regaining control over its own territory.

This intervention has been successful and helped push back DAESH, whilst preventing the genocide that would have followed DAESH successfully overrunning the Kurdish Autonomous Zone. It also helped prevent the prospect of a wider regional conflict that may have broken out if Baghdad had fallen.

There needs to be a similar set of goals in Syria. Goals that need to be set out clearly before any military intervention, not just considered afterwards. Therefore in considering my vote on the UK taking part in military action in Syria I looked for answers to the following questions:

The position set out by the government answers the first question, including a clear legal basis. Our objective is to degrade DAESH overall by striking them in Syria as part of completing our objectives in Iraq. the request for us to assist has come from a number of nations, not just one, with the UN Resolution setting clear terms.

The proposal from the government does not look to strike at Syria as a state. The request is to use precision ordnance predominantly for battlefield support, rather than the type of air strikes that marked the start of the Second Gulf War in 2003.

The second question is the subject of the talks as part of the Vienna Process. Our involvement is based on laying the ground for the implementation of any peace deal and structure of government agreed between the other parties to the conflict in those talks. The motion is clear about the terms for our action, degrade DAESH (referred to as ISIL in the motion) as one component of a wider strategy including the current talks.

Ultimately air strikes can only achieve so much, a force on the ground clearing DAESH is needed as well. In Iraq this is provided by the Iraqi Army and the Kurdish Peshmerga. In Syria we need to work with the forces that are already present on the ground and co-ordinate our actions with other forces already there. These include the Kurds and elements of the Free Syrian Army.

A number of residents have expressed concerns about any potential engagement with Russian Forces present in the area by accident. From briefings being given there is a co operation arrangement in place to ensure strikes do not conflict with each other's operations. UK forces have overfly rights in terms of Turkish Airspace, removing the prospect of a repeat of the recent incident involving a Russian Bomber.

I also looked at the recent suggestions of a “No Bomb” zone to prevent air attacks by the Assad Regime. a no military flying zone would, in my view, be a sensible part of any peace deal, yet the suggestion in this instance of only being enforced from the sea (Ships sitting at least 50- 100 miles away) and potentially launching strikes against Syrian Airbases where Russian forces are currently based to enforce it meant, sadly, it was not a practical one.

Equally important to any military intervention will be the massive international aid effort that will be needed to rebuild the shattered infrastructure of Syria and allow millions of refugees to return home. Whilst the UK has already provided a large amount of Aid to support those affected by the conflict, other nations have not. A more consistent approach will be needed.

Twenty years ago the situation in the Balkans looked as hopeless as the one we face in Syria today. A vicious civil war that had seen numerous war crimes committed and coined the terrible phrase “ethnic cleansing”. Yet after a decisive diplomatic and military intervention by a united global community, peace was restored. I look forward to hearing further detail in today’s debate the Government’s strategy to work as part of the international community to achieve the same goal in Syria.

In closing some emails I have received discuss whether the prospect of us taking action in Syria might increase the prospect of a terror attack here. Since June the UK has been on the highest level of alert and the deadly attack in Tunisia was deliberately aimed at killing western, including British, Tourists. Whilst an attack has not taken place in the UK that is not due to lack of trying by DAESH, with 7 serious plots detected and broken up. We are already a top target for them and the outcome of today’s vote will not change that.

The risk of an attack is already present and the lawless space DAESH are able to operate in creates the perfect conditions for those who wish to plot and direct attacks on the UK, British citizens and our allies. Requests for extradition or arrest of those involved in such plots would be futile, therefore the only option is to look at a military solution in our own self defence to remove this plot.

Given all of the above I will support the motion before the House of Commons today. Inaction is not a risk free option either as it means not working with our allies to tackle a threat to us all.