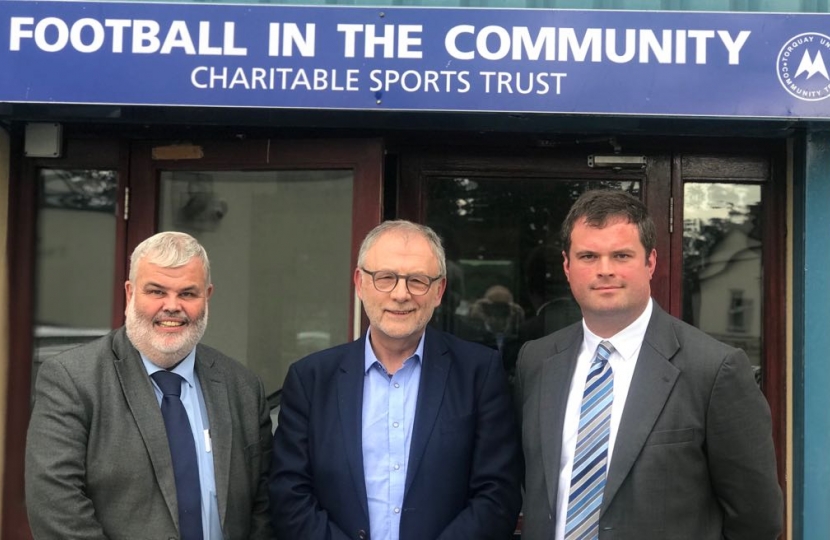 On Tuesday (28th August 2018) Cllr David Thomas and Kevin Foster MP meet with Clarke Osborne, the Chairman of Torquay United Football Club, for a discussion with him and his team about the recent announcements relating to a new stadium.

In this article Kevin comments on the meeting and the outcome of it:

"The meeting was the result of an invitation from Mr Osborne, which followed my raising a number of queries and expressing significant concerns about the plan put forward, not least the lack of details to back them up.

Whilst the meeting was a constructive one, with some useful comments around the new stadium being "the Club's Stadium", both Cllr Thomas and I were clear there was a lot more work which needed to be done before it could be considered any further.

We made clear to Mr Osborne and his team they must demonstrate three core areas had been satisfied. These were:

1. Whether the site as a former landfill could physically take the development concerned.

2. A detailed transport assessment, especially in relation to the suggested events arena and traffic arrangements for it.

3. An ecology assessment of whether the site was suitable for such a development.

This is not an exhaustive list of issues to be considered. There are many others which would need to be addressed, not least the impact on residents living near the site, but if these three are not satisfied there would be little point spending time considering it any further.

We expressed our surprise that these key points were not resolved before the public presentation of the plan last month, although noted consultancies in these areas had been appointed to draw up detailed assessments (At TUFC’s not Torbay Council’s expense). Cllr Thomas and I also made clear the future for Plainmoor Stadium would be a key part of any serious discussions, not an afterthought.

We confirmed during our meeting the images being presented are based on a stadium built in India about ten years ago. The video showing how the stadium might convert into a music or events venue is from a manufacturer who has created similar systems at other stadiums, rather than a specific design for the Torquay Arena.

Turning to Stadium Ownership it was encouraging to hear Mr Osborne state it would be “the club’s stadium”, with non-matchday revenue being available to the club. This would be different to the structure at Coventry’s Ricoh Arena where Coventry City Football Club is merely a tenant of the Stadium Management Company, with no stake in the ground itself. There would also be a Hotel incorporated into the Stadium, with corporate hospitality boxes converting into rooms.

The club also shared some images of the Academy it would like to build. The basic design is impressive and would be a welcome investment in developing youth talent in the bay, though we were informed the Club is yet to identify a site for this facility.

Given the recent events we explored what discussions the Club has had with Torbay Council about the plans. Nightingale Park is owned by Torbay Council, so any scheme would not only need Planning Permission, but an agreement with the Council to purchase the land. We were advised by Mr Osborne they had been talking to the Elected Mayor for 2 years and a representative of the TDA. When further questioned about why they had not engaged more widely with Torbay’s 36 Councillors and the professional officers of Torbay Council about the development of their plan, it became clear they had either not been advised to do so or did not realise the impact of failing to do so before launching a scheme.

It is common practice for those considering major developments to engage with decision makers before publicising plans. This is mostly to avoid wasted effort if it is clear there is no support for their idea, especially if the land concerned is publicly owned. We were told they had been advised the Mayor’s Forum was the appropriate meeting to conduct this. Cllr Thomas made clear this had not been the best way to conduct such engagement and a specific briefing for all Councillors should have been arranged. There should also have been wider engagement with senior council officers on ensuring the details stood up to basic technical scrutiny.

During our discussions Cllr Thomas also made clear any decision on either Plainmoor’s Freehold or the land at Nightingale Park (including any in principle agreements) would involve all 36 Councillors, rather than be a decision solely for the Elected Mayor. The forthcoming elections in May and the abolition of the Mayoral system also meant any indications of potential future support from the Council given to them had to be considered against this backdrop.

The Club indicated they are planning to hold three public exhibitions of their plans. One would be at Plainmoor, another in the Willows and the final one in Torquay Town Centre. No dates for them were given.

Due to the amount of issues to be covered not every question could be asked in the time available, but I have asked for a written response from the club to them. Whilst the stadium was the main focus housing and other leisure developments on the site were also mentioned.

At the end of the meeting we made clear an endorsement of the plans would not be offered by ourselves due to the many questions about it which need to be answered, although we would be happy to continue a constructive engagement with the Club about how it secures its long-term future.”

"Turning to Stadium Ownership it was encouraging to hear Mr Osborne state it would be “the club’s stadium”, with non-matchday revenue being available to the club. This would be different to the structure at Coventry’s Ricoh Arena where Coventry City Football Club is merely a tenant of the Stadium Management Company, with no stake in the ground itself."

At the end of the meeting we made clear an endorsement of the plans would not be offered by ourselves due to the many questions about it which need to be answered, although we would be happy to continue a constructive engagement with the Club about how it secures its long-term future.”