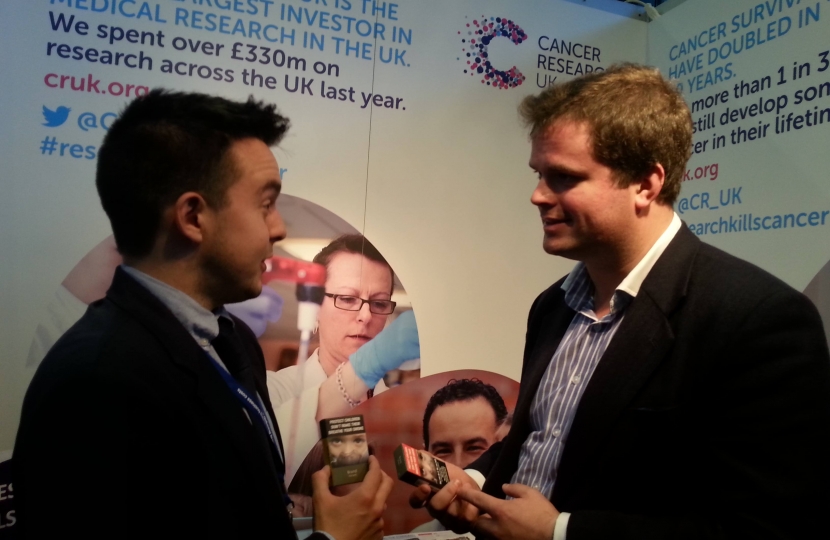 Kevin Foster, Conservative Parliamentary Spokesman for Torbay, has today (Thursday 28th November 2013) welcomed the announcement that the Government is launching an independent review into cigarette plain packaging, to be led by Sir Cyril Chantler.

Figures produced by Cancer Research UK show that every year 460 children take up the smoking habit in the area covered by Torbay Council, with 207,000 11-15 year olds becoming smokers every year across the UK as a whole. Their figures indicate that 21.3% of adults living in the bay currently smoke.

Whilst the policy is generally described as “plain packaging” the reality is that the Cigarette Pack is covered with a standard health warning, leaving a small space for the name of the brand at the bottom. At the Conservative Party Conference in Manchester Kevin met with representatives of Cancer Research UK to discuss the impact this policy could have on reducing the numbers taking up smoking.

Kevin said: “There has been a huge change in opinions and habits since the dangers of smoking were first realised in the 1950’s, yet every year 460 children are still taking up the habit here in the bay. Given two thirds of smokers start smoking as children we must continue to do all we can to encourage them not to start in the first place. I therefore welcome the review, led by Sir Cyril Chantler, which will look at the impact on public health, and children in particular. I am also pleased the government will be bringing forward an amendment to the Children’s and Families Bill which will enable Parliament to legislate for plain packaging.”

“This is not about ending freedom of choice, those who wish to smoke will still be able to, it is about removing the temptation to start. Every year hundreds of people in Torbay die needlessly due to the effects of smoking related illness. If the implementation of standardised packing saves just 1 life then it is worth doing and will therefore receive my support.”

"This is not about ending freedom of choice, those who wish to smoke will still be able to, it is about removing the temptation to start."