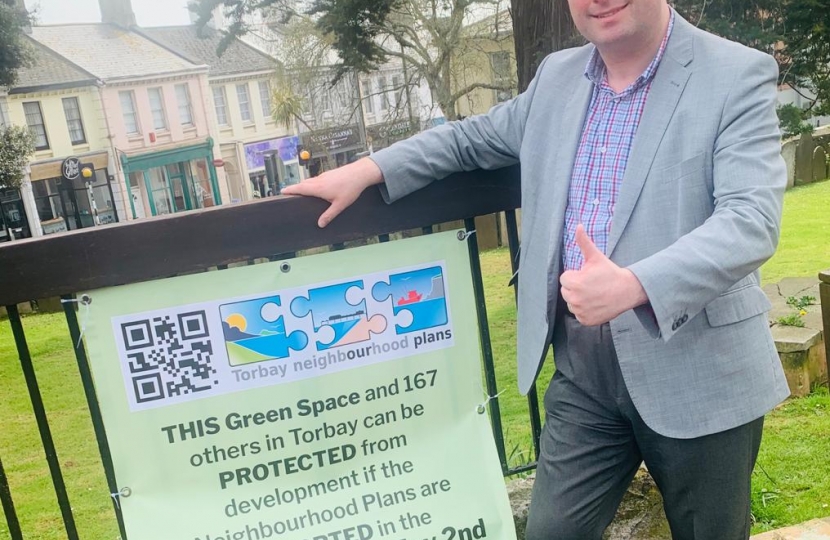 Every fortnight I write a "Kev's Column" for the Herald Express and you can read the latest edition (Published on Wednesday 1st May 2019) below:

I was saddened to read news a formal Civic Welcome for the promotion winning Gulls had been blocked on the ground of “pre-election purdah”.

Whilst I am not a member of the same political party as Torbay Council Chairman Iain Doggett, I would have had no problem with him donning his Chain of Office and formally congratulating them all at the Town Hall this week. The Chairman’s role is ceremonial not party political.

I hope after next week’s election a formal recognition of TUFC's achievement on behalf of the whole bay can be organised.

Tomorrow (Thursday 2nd May) voters will be asked to approve Neighbourhood Plans for Torquay, Paignton and Brixham (Which covers the wider Peninsula as well).

A majority is required in each town to pass their respective plan. Votes in Paignton do not count towards the plan for Torquay and vice versa.

The plans reflect a balanced way to develop our bay inspired and put forward by members of the local community. I would therefore strongly urge Herald Express readers to vote Yes in the Neighbourhood Plans Referendum.

The plans will give 168 local green spaces a greater level of protection and ensure the priorities of local communities are considered when Planning Decisions are being made.

Voting No will not send a message on Brexit, change a national policy or annoy any politician at the Town Hall, it will just produce a negative outcome for local people.

Last Wednesday Cabinet Office Ministers, including myself, faced questions in the House of Commons from MPs.

Despite having spoken hundreds of times in the chamber since my election in 2015 I did feel some nerves whilst waiting to be called to speak from the Despatch Box for the first time. When speaking at the Despatch Box you must face forward, meaning the only faces you can see are those of Opposition MPs.

Whilst some MPs will give Ministers prior notice of their question, most do not, so you must react immediately to what issue has just been raised.

The subject of my first question was Lords Reform, with more questions following on support for disabled candidates in the local elections, work to combat fake news and electoral registration.

Today (Wednesday 1st May) the Fragrance Group will unveil its plans for a long-standing eyesore, the Lighthouse Building on Paignton Sea Front.

This building has for years been a derelict mess, so regeneration work is needed. I look forward to seeing the detailed redevelopment plans, with work already underway on the new Park Hotel next door.

As Torbay’s MP I will work with the Councillors residents will elect tomorrow to ensure we also deliver much needed regeneration work for our Town Centres.

My next surgeries will be on Friday 3rd May from 3pm till 5pm at Age UK Torbay, 12 Dendy Rd, Paignton TQ4 5DB and Saturday 11th May from 11am till 1pm at The Acorn Centre, Lummaton Cross, Torquay, TQ2 8ET.

"The plans reflect a balanced way to develop our bay inspired and put forward by members of the local community. I would therefore strongly urge Herald Express readers to vote Yes in the Neighbourhood Plans Referendum."