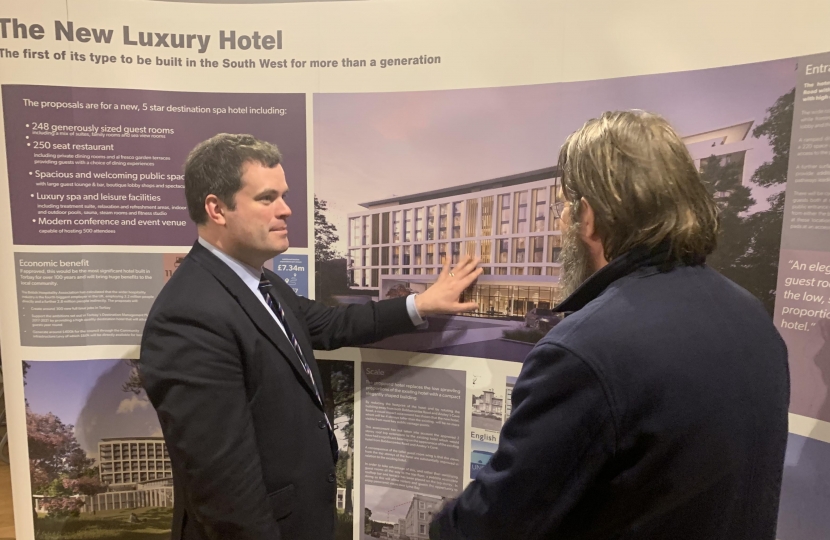 Every fortnight Kevin writes a "Kev's Column" for the Herald Express and you can read the latest edition (Published on Wednesday 6th March) below:

I have many special memories of events at the Palace Hotel, Torquay from my time in politics and my marriage to Hazel.

Yet the grand building is now a sad sight having closed two years ago ahead of a major redevelopment by the Fragrance Group who will unveil their plans for the site this week. I look forward to seeing details of what is expected to be the largest Hotel Investment in our bay for at least 50 years.

We could be seeing one of the biggest periods of hotel building and investment in Torbay for decades. A welcome sign of our bay being able to offer the standards modern travellers demand, whilst boosting the economy and helping regenerate our Town Centres.

Last Wednesday saw the latest major debate on Brexit in the House of Commons.

Whilst the motion submitted by the Government was a neutral one, in effect noting the ongoing negotiations, the ability of backbenchers and the opposition to propose amendments to make it a more substantive effect gave the debate much greater significance. Especially as it became clear a rebellion could see the Government lose a key vote which would have altered House of Commons procedure. This would have seen control of the parliamentary process shift from the Government to a group of Backbenchers promoting a bill to delay or even stop Brexit.

In the face of certain defeat the Prime Minister announced when future votes will take place. The next Meaningful Vote, which could approve a deal with the EU, will be by 12th March. If a deal not approved by 13th March MPs would vote on leaving with “No Deal” and after this on a potential delay to Brexit.

Delaying the date does not change the choices MPs face. Talks in Brussel on the Northern Ireland Backstop are going better than some might have predicted, but when the vote returns MPs must decide on the options which exist, not those they may wish for.

Last week Dr Sarah Wollaston set out why she was one of 11 MPs leaving their existing political parties to form a new Independent Group.

I disagree with her decision and the reasons she gave for it, yet politics is not made better by personal attacks or acrimony.

Sarah was one of three MPs who left my party and shortly before Prime Minister’s Questions they came into the Chamber to take their seats for the first time on the opposition benches. I was called to ask a question shortly afterwards and made clear my thoughts:

“I must say that, although my hon. Friend the Member for Totnes (Dr Wollaston) no longer sits on the Conservative Benches, she remains my hon. Friend.”

"We could be seeing one of the biggest periods of hotel building and investment in Torbay for decades. A welcome sign of our bay being able to offer the standards modern travellers demand, whilst boosting the economy and helping regenerate our Town Centres."