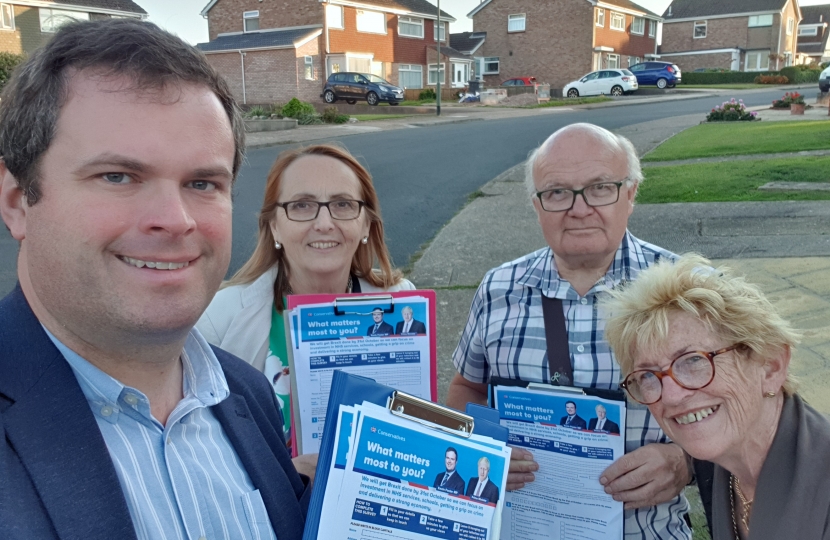 Kevin was recently asked to write a "Kev's Column" for regional newspaper the Sunday Independent and you can read it below:

This column should be very different. It should be setting out how, after a difficult week in parliament with the opposition parties pushing for yet more delay and indecision on Brexit, it is now YOUR chance to decide in a General Election on Tuesday 15th October.

I should be setting out how you can use your vote to resolve Brexit and to take forward an exciting domestic program including 20,000 extra Police Officers, increased funding for local Schools and deliver Town Deals for many communities across our region. Yet for the first time in UK political history opposition parties have blocked a General Election taking place.

Their first excuse for doing so was because a bill attempting to force a further Brexit delay needed to become law before they could vote for an election. Yet once this bill was passed, they still blocked an election. The second excuse was calling an election is a tactic to secure a No Deal Brexit, yet the reality is an election on Tuesday 15th October would have allowed voters to choose which Prime Minister went to negotiate with European Leaders on 17th October, either Boris Johnson or Jeremy Corbyn.

The reason for them opposing an election is simple, the opposition can only agree on trying to force more dither and delay, not provide a coherent alternative. It is impossible to see what another 3 months of delay will achieve after 3 years, apart from further undermining public confidence in the ability of MPs to make their mind up. What do Labour and the Lib Dems believe will happen in the next 3 months to magically solve Brexit? Are EU Leaders going to change their mind on 1st January in a way they would not on 31st October?

The reality is the latest pressure for a delay is about adopting a position for today’s media headlines, not the future. I appreciate some don't like the fact a decision must now be made and would rather continue spending their time scoring party political points or offering soundbites about “No to No Deal”, rather than have to explain clearly to their voters why they voted for a final option. Deadlines make deals, not delay, and the Prime Minister is right to set one.

A General Election would have given voters a chance to express their views and elect a parliament prepared to deliver the Referendum Result. Hearing MPs complain about their constituents being silenced and saying they want to “stop the coup”, yet then watch them vote to prevent a General Election deciding this matter was the height of hypocrisy.

Our constitution is based on a balance between the Government and Parliament, with the electorate asked to make a judgement where a dispute needs to be resolved between the two. This is what should be happening now, sadly those who are keen to attack the Prime Minister and his Government do not have enough courage in their convictions to take their case to voters.

"The reason for them opposing an election is simple, the opposition can only agree on trying to force more dither and delay, not provide a coherent alternative."