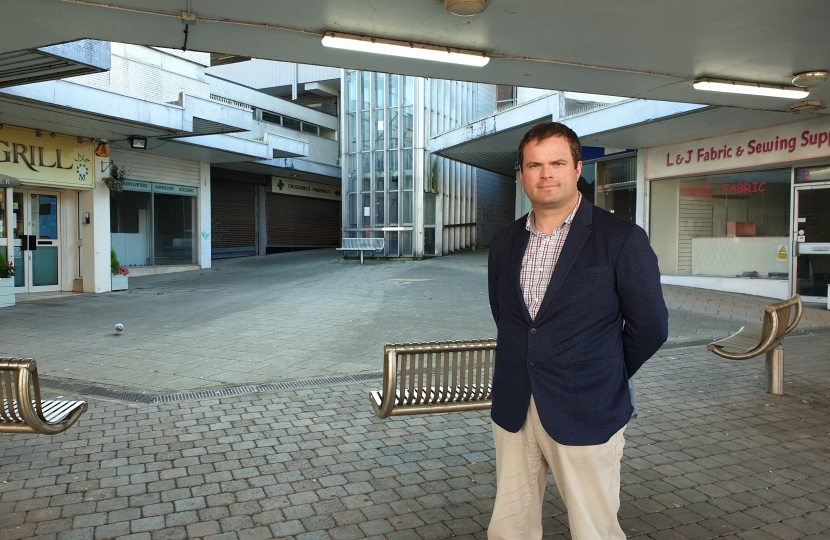 Every fortnight Kevin writes a “Kev’s Column” for the Herald Express and you can read the latest edition (Published on Wednesday 2nd October 2019) below:

For many years Crossways Shopping Centre has blighted Paignton Town Centre, yet progress is now being made towards a solution.

I have regularly called for Torbay Council to use its Compulsory Purchase powers to finally make progress with this site and spoke in parliament about changing the law to make it easier to do so. The remaining businesses could be supported to find better accommodation to allow this eyesore to be removed, hopefully to provide much needed homes or local facilities.

I am delighted a big step forward was taken last week as Torbay’s Councillors voted unanimously to approve a plan for the compulsory purchase of the centre for regeneration purposes.

I look forward to doing whatever I can to support the Council in taking forward this plan, including giving a hand with the demolition works if needed.

I joined our Police and Crime Commissioner Alison Hernandez to present the policing minister with Devon and Cornwall’s bid for additional funding to deal with the impact of millions of summer visitors.

Not every visitor behaves well, with some seeking to target the vulnerable or those enjoying a break. The figures presented in the bid for money from the Special Grant Fund to the minister show an 11% rise in crime in the months between April and September, a 14% rise in incidents and an 18% increase in missing people. The bid from Devon & Cornwall details £17.9m of expenditure over three years linked to the ‘summer surge’ and requests compensation for this.

The case being put forward for recognition of this in funding terms is compelling and the Government should respond positively to it.

On Sunday I was delighted to attend a service to mark the 375th anniversary of the re-establishment of regular Roman Catholic worship here in the bay.

In 1644, whilst the English Civil War was raging, a small chapel was created in the attic of Torre Abbey. Those attending the first services must have had a sense of trepidation as the extreme religious persecution of only a few decades earlier, which had seen the ancient Abbey disestablished, would have been all too fresh in their minds, with some perhaps wondering how long their new place of worship could last. Yet the congregation they founded was sustained and in 1854 moved to Our Lady of the Assumption in Abbey Road, Torquay.

It was good to reflect with Fr Colin and Bishop Mark on this journey of faith and freedom of religious belief from a chapel in an attic to the church in the bay today. It also gives a message of hope for those churches meeting secretly today in places like North Korea about what a small beginning may grow into.

My next surgeries will be on Saturday 5th October from 11am till 1pm at Preston Baptist Church, Old Torquay Road, Paignton, TQ3 2RB and Friday 11th October from 3pm till 5pm at The Windmill Centre, Pendennis Rd, Torquay TQ2 7QR.

"I am delighted a big step forward was taken last week as Torbay’s Councillors voted unanimously to approve a plan for the compulsory purchase of the centre for regeneration purposes."