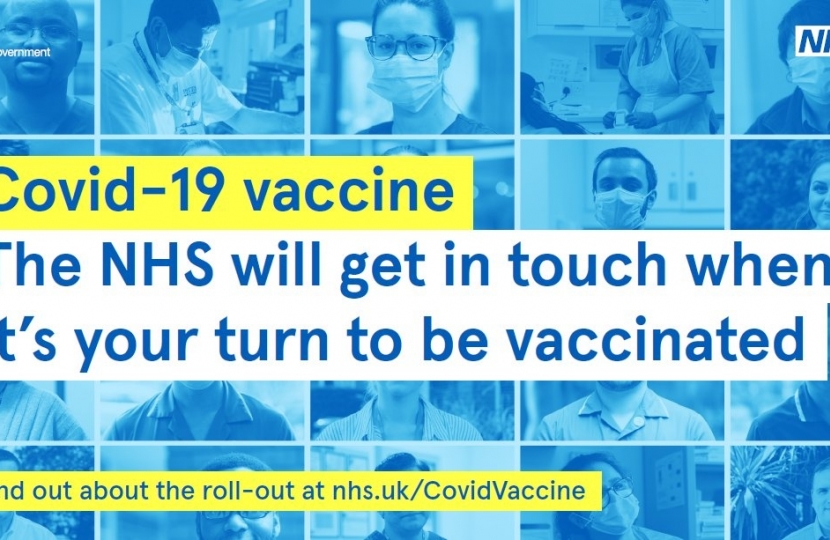 Torbay’s MP Kevin Foster has welcomed the latest news on the vaccination programme showing a further surge in the number vaccinated across our county and bay.

Across Devon 157,181 vaccinations have been administered, as part of plans to vaccinate the top 4 priority groups by mid-February. This includes 63,305 Devon Residents aged 80 or over (79.6% of the total number of Devon residents in this age group). In the South West Region as a whole, 661,646 people have received a vaccine, with 715,223 doses administered in total across the area.

The latest figures show, over the last seven days, the number of people who have been vaccinated has increased by 2.5 million – an increase of 50 per cent in a week. Over 13 per cent of the entire adult population has so far received a vaccine. In England, first doses have been delivered to over four-fifths of those over 80, over half of those aged 75-79 and three quarters of elderly care home residents.

“The NHS vaccination programme, the biggest in our country’s history, has got off to a fantastic start thanks to the hard work of all of those involved, especially the volunteer “Jabs Army” who have helped keep the Riviera Centre Vaccination Hub running smoothly and took the life saving vaccine into our local care homes.”

“There is still a lot of work to do, but the fightback against this deadly threat is now well underway. Even in these dark days of winter we can now very much look forward to the blue skies of summer.”

“Finally, I would urge all to do their bit by taking the vaccination once called to do so. One of my closest relatives is a care home resident in our bay and received the vaccination alongside other residents of his home last weekend.”