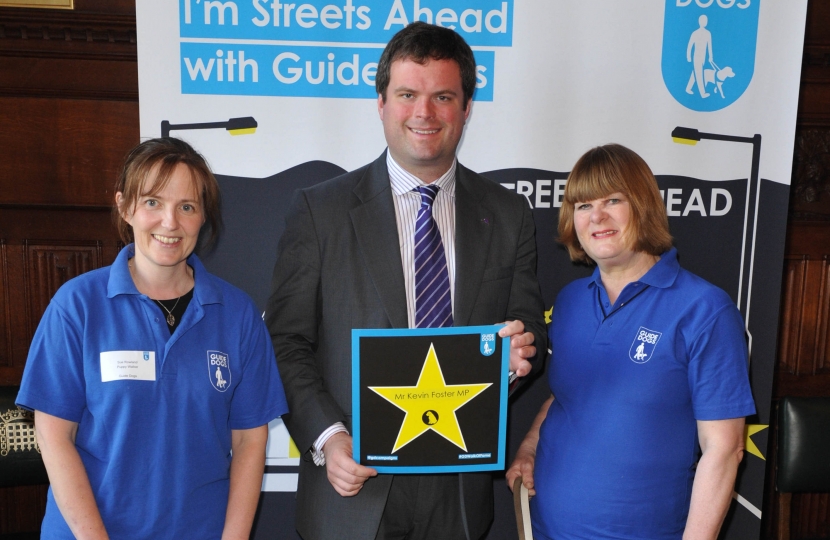 The event, hosted by Lord Holmes of Richmond, highlighted the problems faced daily by guide dog owners who are being forced to walk into the road to avoid cars blocking their path.  MPs heard from one guide dog owner who had even considered giving up his guide dog because of the constant obstructions he faced when out and about.

Pavement parking is already an offence in London, but the rules in the rest of the country are complex and patchy, leaving drivers uncertain of where they can and cannot park.  Guide Dogs is calling for the introduction of comprehensive laws across the UK, which will outlaw pavement parking, but allow local councils to grant an exemption in areas where pavement parking is unavoidable.

Kevin said: “I support this campaign for a change in the law because it strikes the right balance between keeping pavements clear for those with mobility issues, but at the same time allowing councils to designate areas where some flexibility needs to be allowed due to the narrow or historic nature of the streets concerned. It will also make the situation clearer for drivers who would know exactly where they stand in terms of being able to use part of the pavement when parking their car, rather than the current situation.”

James White, Campaigns Manager for Guide Dogs, said: "Cars parked on pavements blight the lives of people living with sight loss and other vulnerable road users including wheelchair users and parents with buggies or prams. Imagine how frightening it must be to step out into a busy road when you can't see on-coming traffic, or you have your young child with you. We want to stop people from being forced into the road and we call on all parties to support a new law on pavement parking."

About The Guide Dogs for the Blind Association: The Guide Dogs for the Blind Association is a British charitable organisation founded in 1931. Guide Dogs provides independence and freedom to thousands of blind and partially sighted people across the UK through the provision of guide dogs, mobility and other rehabilitation services. It also campaigns passionately for the rights of those with visual impairments. Guide Dogs is working towards a society in which blind and partially sighted people enjoy the same freedom of movement as everyone else.