Kevin Pledges Support To Help Veterans Back Into Society After Prison 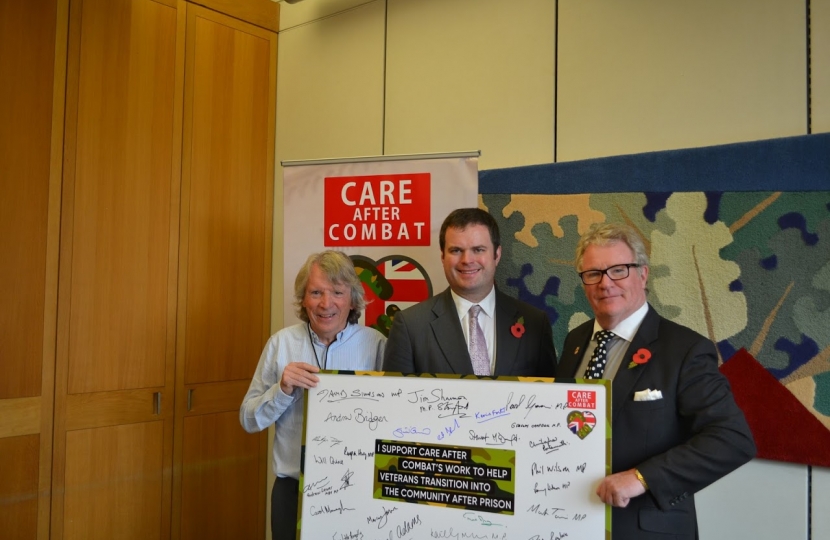 As part of a series of Remembrance events, Torbay’s MP Kevin Foster attended a Parliamentary session with Care after Combat, the charity working to help prisoner veterans to reintegrate into society after leaving prison, to learn more about its vital mentoring services.

The charity highlighted it is only currently able to reach 1 in 10 prisoner veterans and increased funding is urgently needed to roll out its services UK-wide and support all eligible veterans currently serving sentences.

It is estimated there are currently 3,500 former servicemen incarcerated in England and Wales. According to Care after Combat this represents the largest single occupational cohort within prisons and one of the most vulnerable groups.

Co-founded by Jim Davidson OBE in 2015, Care after Combat mentors incarcerated veterans serving the final eighteen months of their sentence to help them make the successful transition from prison life, back onto civvy street.

Speaking at the session, Jim Davidson OBE, Chief Executive Officer of Care after Combat said:  “I was really pleased to come to Parliament today and receive so much support and encouragement from MPs. At a time when our prison service is struggling to cope, Care after Combat could play a greater role to reduce reoffending and help former veterans by restoring the sense of stability and purpose which they enjoyed whilst serving in the Armed Forces. While we welcome the additional £10 million cash injection to the Armed Forces Covenant Fund to support mental health projects, we call on Government to recognise the specific requirements of this group and increase funding for veteran prisoner community transition services.”

Kevin Foster MP said: “The Armed Forces Covenant is an agreement between our country and those who put their lives on the line to defend it, and we have a responsibility to look after the welfare of all our veterans, especially as they leave the Armed Forces and make the massive and often daunting challenge of transitioning to civilian life. Care after Combat provides dedicated support for those least able to make this transition and who often fall into the prison system as a result. We must do everything we can to end this vicious cycle and I was pleased to meet Jim not only for a discussion about their work, but to pledge my support for it.”