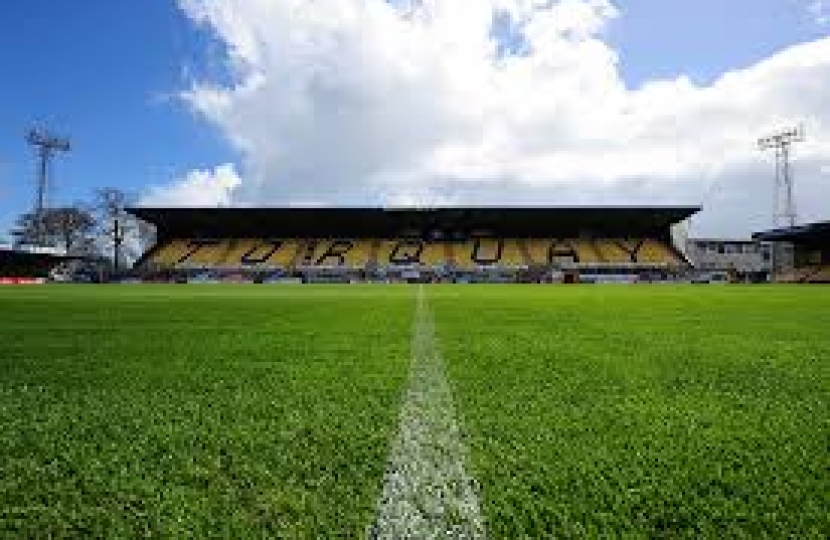 With the Gulls flying high at the top of the league , there is every chance of a welcome return to League Two football for Torquay United in 2011/22.

Like all clubs in the National League, finances have been hit hard, this season by the loss of vital match day revenue, commercial income and hospitality and catering. Despite this the players and management have done a brilliant job on the pitch, as have the club’s staff off the pitch by not only making Plainmoor Covid - secure, but also keeping the Club running on a day to day basis.

The passionate and loyal fanbase has also been superb, and their buying of match day streams has been vital in bringing much needed revenue into Plainmoor.

Over the last week Kevin Foster MP has held discussions with both the Directors and the fans at Torquay United about the current state of play at the club. The level of unity at such a difficult time has been very welcome.

Kevin, the Club’s owners and the fans are all agreed that now is not the right time to impose extra debt on hard pressed non league clubs like TUFC, by way of offering additional financial support as a loan, rather than a grant.

Kevin Foster has written to the Culture Secretary Oliver Dowden MP today, with the backing of both the Club’s Directors and it’s fans, pointing out just how important TUFC is to its local community in good times and bad, and highlighting the lengths it has gone to make the club Covid secure and sustainable over the last ten months.

Kevin has encouraged the Secretary of State to work with the National League to ensure that vital financial help for Torquay United and other League members comes in the form of a grant, and not a loan.

Both the fanbase and local residents will be updated once Kevin receives a reply to his request.