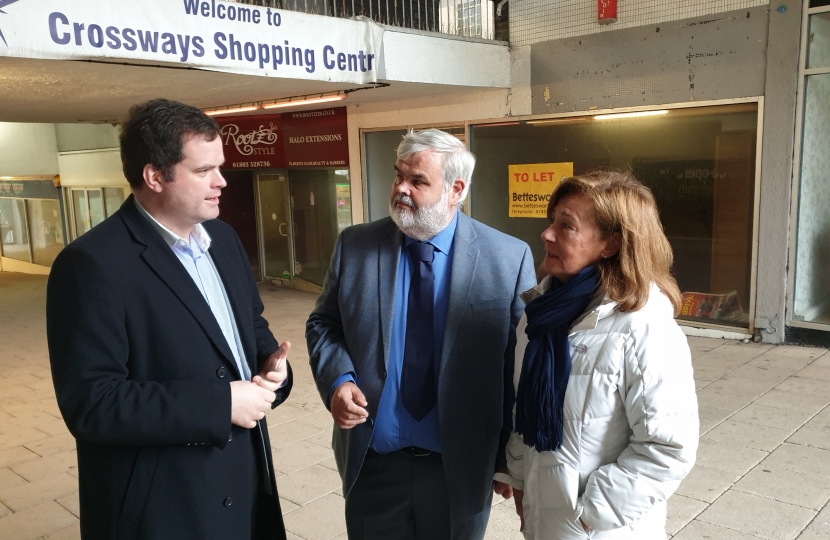 Torbay’s MP Kevin Foster has reacted with disappointment to news Royal Mail has registered an objection, alongside the current owner, to the proposed Compulsory Purchase of the near derelict eyesore Crossways Shopping Centre in Paignton.

Torbay Council voted in September 2019 to start the compulsory purchase process while holding talks with the owner, in the hope of securing a voluntary deal. In December, a redevelopment scheme to build 89 sheltered and extra-care flats on the site was given planning permission.

Kevin has welcomed progress being made on a scheme to regenerate the site, which will be a key part of delivering Paignton’s Future High Streets Fund Project, which was awarded £13.36m of capital funding by the Government on Boxing Day (26 December 2020).

Kevin will be writing to Royal Mail's Chief Executive offering them a chance to explain their company's actions.

"Crossways is an absolute eyesore and urgently needs action. If Royal Mail have genuine concerns about their delivery office these could be dealt with much better by working with Torbay Council and the community to find a solution, rather than alienating local residents by seeking to hold up the desperately needed redevelopment of this site.

"Whilst the owner's views on the CPO are not unexpected, the intervention by Royal Mail's management can only be described as an ill thought out act which could damage Paignton's attempts to recover, a stark contrast to the way frontline postal staff have worked hard and gone out of their way to support our community during the pandemic. Royal Mail management needs to find the community spirit Paignton's Posties have been showing every day and withdraw this objection immediately."

The attached photograph of Kevin Foster MP, Cllr Dave Thomas and Cllr Barbara Lewis at Crossways Shopping Centre was taken before the current lockdown restrictions. You are welcome to reproduce it.

Kevin has been contacted by a number of constituents in recent days who are supporters of Torquay United, and who are concerned about the effect the proposed changes to a European Super League could have on teams in the lower leagues.