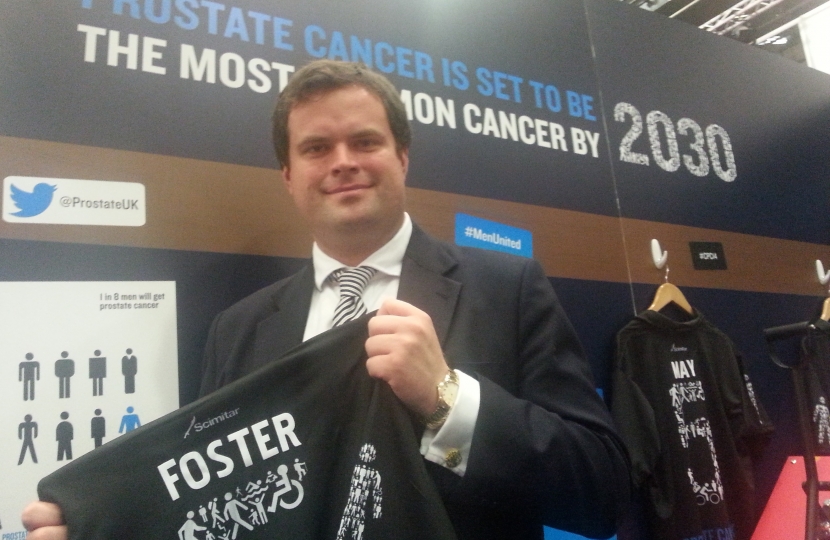 The Men United campaign to tackle the inequalities faced by those with Prostate Cancer was the focus of a recent meeting at the Conservative Party Conference between a leading bay politician and campaigners from Prostate Cancer UK.

Despite being the most common cancer in men, those affected by prostate cancer continue to face a number of injustices, particularly when it comes to accessing the best treatments and aftercare support for their condition. These include a lack of awareness about prostate cancer, the differences experienced by older and younger men and the variation across the UK in the care that men receive.

Whilst figures show that the South Devon Healthcare NHS Foundation Trust was in the top 5 across England for giving men with Prostate Cancer a written Care Plan, with approximately 35% of their patients receiving one, in Plymouth less than 20% did.

Prostate Cancer UK was at the conference calling for urgent action on these issues and asked Torbay Conservative Candidate Kevin Foster to support the charity’s game plan by signing up to Men United, a new team which seeks to unite people across the UK against the common enemy of prostate cancer.

Kevin said: “Every hour one man dies of Prostate Cancer and it is vital that men affected by this illness get the support they need if we are to reduce that number. I was delighted to sign up to the Men United campaign and I hope this Conference Season campaign will result in England being top of the league for prostate cancer care.”

Anyone with concerns about prostate cancer can call Prostate Cancer UK's confidential Helpline on 0800 074 8383 or visit www.prostatecanceruk.org – the helpline is free to landlines, staffed by specialist nurses, and open from 9am to 6pm Monday to Friday with late opening until 8pm on Wednesdays.

"I was delighted to sign up to the Men United campaign and I hope this Conference Season campaign will result in England being top of the league for prostate cancer care."