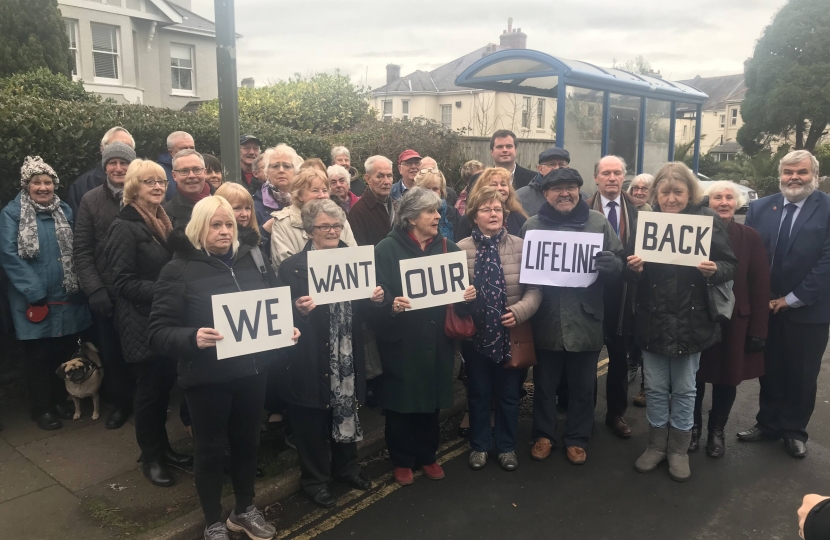 After successfully supporting a residents’ campaign to re-instate neighbourhood bus services last year Torbay MP Kevin Foster is again taking up their cause after they again face being left without a service.

Torbay Community Development Trust announced it is to suspend the 60\65 services from Saturday 8th December for at least 4 months whilst it reviews the provision of the service. This will leave many residents in Livermead, Babbacombe and Preston without the service they rely on them for everything from a trip to the shops to attending a hospital appointment.

When the previous operator pulled out in April 2017 a major campaign was launched to preserve a vital service for many residents, yet despite them now being delivered on a “not for profit” basis it has been revealed they are running at a loss of £1,000 a week. Whilst some passengers make a voluntary additional donation towards running the service, 90% of passengers on the routes only pay concessionary fares.

Kevin Foster MP said: “News the 60 and 65 services are to be suspended for four months (last service Saturday 8th December) will be a blow for those who rely on them for everything from a trip to the shops to attending a hospital appointment.

“A community model of delivering bus services which are not likely to make a profit, but provide a vital service, makes sense. Now Torbay must find a solution which ensures those with free bus passes actually have a service they can use them on. I will be meeting with local Councillors and residents to see how we can do this.”

The photo linked with this article is one that was taken in January 2018 when fighting this campaign previously.